Megapolis is an epic series of works about the city and its inhabitants. All the works add up to a vast, calm and somewhat dark cosmology of post-millenium urban reality.
There are boys, dogs, policewomen, crooks in roundups, homeless people and, of course the big city itself. 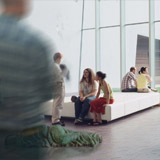 Obese boy looking at the city

The saga of city starts with an obese boy and a city panel. The boy is sitting on a small children's stool over which his buttocks are flowing. On his head he has a television-like box and through his back we can see in his stomach. 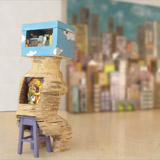 The box on the boy's head has clouds outside and inside a city-like structure. But it's not a copy of what he is looking at. The city is brighter and there are some additional items.
Through the boys back we see what the boy has eaten, junk food obviously. 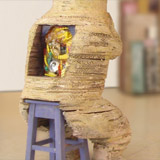 From the front we can see that the boy is drinking from a bowl; and we see slippers in the city. Is this the artists message? Are we obese, childish consumists who's dreams and realities are made in the media?
May be not; the work is not pretensious. The boy is not a greedy consumer but rather a bit lost. He seems self sufficient, not bothered by what's around him.
He lives in the city, looks at the city and the city is inside him. But he is not interacting with it.
If we look at the boy with his introverted, slightly forward leaned posture we start to like him. How he is escaping from his solipsism with the food he's taking in. 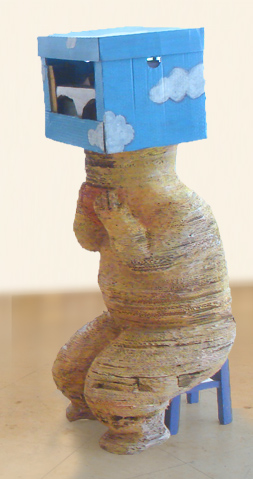 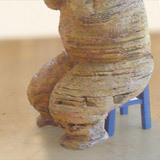 Let's have a look at the city. It's a rather dark work, and it is big; several meters wide. Its a city at night fall maybe. There are no trees nor cars, just buildings. No peolple are visible at first sight, but it seems inhabitet. The big panel has a strangly menacing atmosphere; one looks for common city attributes like "glamour" or "devastation" or "bistro", but one can not find them in this city.
The city is the setting for the stage, the stage itself, and it is a mother of all things at the same time.
We'll have a closer look at this panel in brief, but first we will introduce some more of the figures... 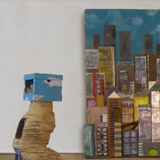 Next character we meet is a homeless sleeping on his side. A dog sleeps at his feet and a bottle of wine stands near his head. The homeless is enrolled in his blanket which he is holding from the inside. Like all other figures he is well over live-sized, giving the figure something monumental. This creates a enigmatic contrast with the undisturbed and soundless aura of the ensemble 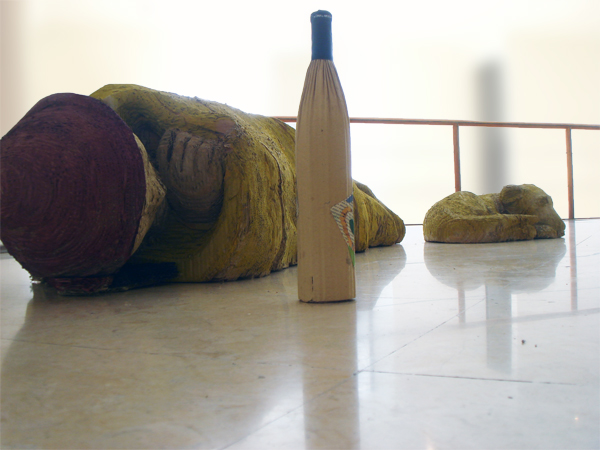 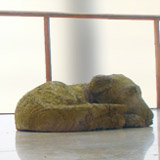 Then there's the magnificant roundup. Three men are controlled by a police woman. They stand with their hands by the wall. Are they crooks or imigrants? Guilty or not? A large police woman stands behind them with a newspaper in her hand. (In Portugal newsparers are used to hit dogs.) But she doesn't seem to hit the man, but rather touch him. The man to be touched squashes his face on the wall. The artist says about this work that it is (among other things) an erotical scene.
All figures are extremely wide and massive projecting an aura of violent and applied force in an otherwise soundless street scene. 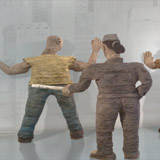 Cardoso achieves amazing expressions in the faces. Take to account that sculpturing the irregular and fragile texture of cardboard layers is very hard to do. 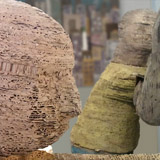 There is the heavy couple statue. A man and a woman glued together and separated by a vertical layer of gift boxes. Both man and woman stare afront. While the woman has her lips closed but the man's open mouth spans all around his head. There is no interaction between the two, no past or future movement visible. Are these the parents of the obese boy?
In this work the destruction of thingsism is obvious. O casal was the first figure of the Megapolis series.
What happened to the flamboyant love scenes Nelson Cardoso was painting only a few years ago? Let's have a look at the artists biography at this point of time... 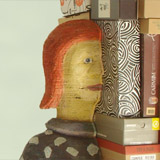 Prior to 2007 Nelson Cardoso was known for his luscious scenes of love and trickery. And he was known to drink up the Lisbon nights up to the last drop. What happened to the sculptor that said he could only work when he was happy?
Around 2007 his house mate and friend dies in a horrific car accident together with a prostitute. He riscs to loose the house and workshop in Sintra. A few months later he breaks his leg and is imobilized for several months. Beeing unable to work with stone and abstinent of diversions he starts to sculpture layers of cardboard; the birth of the Megapolis series. 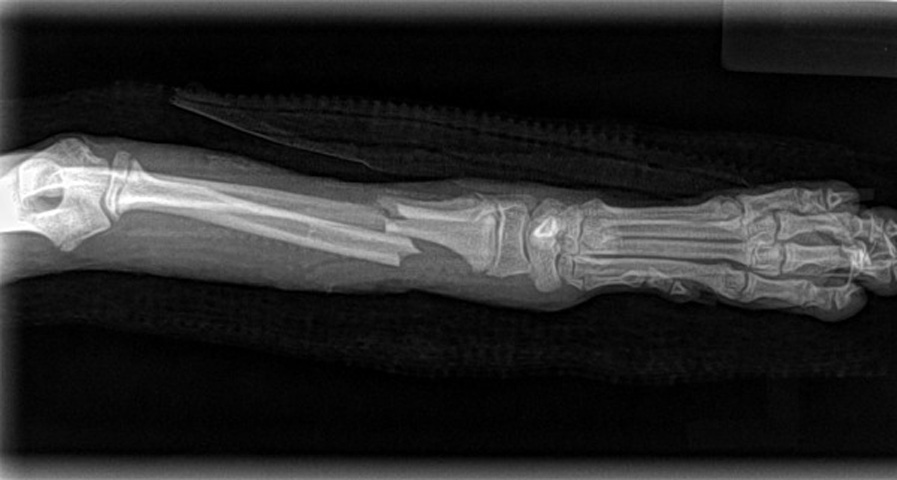 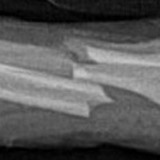 Back to the grand city panel; as we come closer we see there are people. Nelson Cardoso has given up some of his favourite pulp fiction issues for this work. Coming close to the panel the warmth of the cardboard material starts to take over. It contrasts the menacing atmosphere the panel transmitts as seen from a few meters distance. 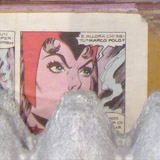 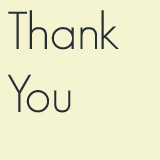